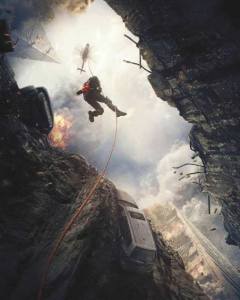 “The absolute best thing about San Andreas was Paul Giamatti,” says North Bay geologist and junior college teacher of earth science Susan Panttaja, “because he was so obviously a really good scientist, and in movies like San Andreas, the scientists are not always very good scientists.”

San Andreas, the city-rattling blockbuster in which the state of California suffers the biggest recorded earthquake in history, might star action hero Dwayne Johnson (aka “The Rock”) as the film’s steady heart and soul, but it’s Paul Giamatti who provides the movie’s brains.

As Cal Tech geophysicist Lawrence Hayes, Giamatti gets to deliver the most intelligent lines, which are pretty much the only intelligent lines in a film that’s riddled with cringe-worthy dialogue but loaded with jaw-dropping special effects. From Los Angeles to San Francisco, every major landmark we’ve seen on postcards is either dented, destroyed or seriously threatened—though why Coit Tower survives when the rest of the city crumbles is never explained.

Perhaps Panttaja can explain it. She has a knack for taking complex scientific principles and decoding them so that even regular folks can understand. It was once said of her during a science hike in the San Andreas Fault Zone at Point Reyes, “She knows what a rock is thinking.” I confess that I was the one who said that. Panttaja, in addition to being brilliant and insightful, also happens to be my wife.

“Part of what makes Paul Giamatti a believable scientist in this movie,” she says, “is the sense he gives at the beginning, before the earthquakes have begun, when he’s displaying that thrill-of-the-hunt thing that scientists have when they are working on a problem. The actual science they were doing—something about electromagnetic pulses as a way to predict earthquakes—that was very reasonable science. And yet, he and his collaborator were so thrilled and excited when they started getting results, and then they took off on this adventure to get more data, to go and look at stuff, which is a lot of what science is. It’s looking at stuff. The joy of the science they were doing was so believable and fun to watch. I’ve seen that a million times.

“A lot of people think scientists are boring and serious,” she adds, “but as a scientist myself, I’d say that one of the best things about science is the excitement of the lab, with all the grad students scurrying around in the cramped little offices, and the incredible joy that happens when you’re pulling the data together and starting to see a pattern, and then you just want to run out and get more data. It feels like the best thing in the world, and I thought it rang really true in this movie.”

Ultimately, Panttaja observes, what’s most moving about Giamatti’s character—“mild spoiler alert ahead”—is that he loses his partner when the quakes start happening, and that loss, pardon the pun, shakes him up pretty badly.

“It happens,” Panttaja says. “Science can be dangerous. Certain scientists do take risks, certain geologists go out and investigate things where there are very real dangers. I think of the scientists who died at Mount St. Helens when it erupted. We do occasionally put ourselves in dangerous places to do what we do.”

Though Panttaja’s current work is rarely more hazardous than her drive on 101 to Santa Rosa Junior College, she did her graduate work in Antarctica, where she scaled mountains, dangled into crevasses and trekked through sub-zero temperatures.

“Geologists do die doing their work,” she acknowledges. “They get injured. But they also work as safely as they can. They are not reckless, but they are trying to figure something out, and sometimes that means you lose a good scientist, as happens in the film. I thought Giamatti’s reaction to that was one of the best things in the movie. And when he recognizes that there’s going to be another quake, having just lost somebody, all of that grief turns to heart, and he starts doing everything he can to save people. His humanity comes out in the movie, beautifully, I think.”

Giamatti, in fact, gets to utter what Panttaja believes is the best, most useful lines in the whole film.

“The truest, realest thing in San Andreas is when Giamatti says, ‘Take cover, and hold on!’” she says with a laugh. “He tells people what to do when an earthquake happens. Take cover. Hold on. I loved that, and he said it with so many levels of emotion. It takes a great actor to say, ‘Take cover and hold on,’ and make it scary, comforting and beautiful all at once. I just love that character so much.

“The rest of the movie,” she goes on, “was kind of ridiculous. Like that huge trench near Bakersfield—that was supposed to be the San Andreas Fault? Really? I don’t think so. That just wouldn’t happen. Were talking about a strike-slip fault. The 1906 quake did have ground shift and separate like that, but for very short distances. We’re not going to see gaping holes in the Earth that run for miles and miles so you can’t drive far enough in either direction to get around it.”

Of course, it does give “The Rock” a chance to steal a plane to fly over the trench on his way to save his daughter from a collapsed building in San Francisco, where Coit Tower is still standing.

“I’m glad the murals in the tower were saved,” Panttaja says, “but I really think Coit Tower would go down; at least it would in an earthquake big enough to cause all that other damage.”

And don’t even get Panttaja started on the tsunami that hits the city in the latter part of the film.

“You need vertical displacement to get a tsunami,” she says. “A strike-slip fault is lateral displacement, not vertical, so a tsunami hitting the city after a quake on the San Andreas Fault—that would never happen.”

That scientific impossibility aside, as disaster movies go, Panttaja confesses that she had a good time with San Andreas.

“I must admit it was lots of fun,” she says, adding that, with sales of earthquake supplies having increased by 300 percent following the release of the movie, “Maybe we need a ridiculous disaster movie every three or four years, just to make people think about what they’d do in an emergency.

“And besides,” Panttaja says with a laugh, “sometimes it’s just good fun, and maybe even a little cathartic, to watch everything fall down and go boom.”