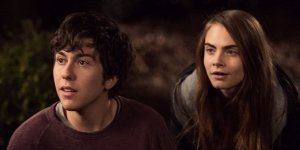 Whispered just loud enough to be heard over the end-credit music now blaring merrily from the vicinity of the movie theater screen, my 20-something son Andy succinctly puts his indelible stamp of approval on Paper Towns, the latest film adaptation of a book by Young Adult (YA) novelist John Green. The movie, an enjoyably offbeat love story, of sorts, involves a nerdy high school senior named Quentin (Nat Wolff), who hits the road with a robust van-full of friends, to follow clues possibly left behind by the hero’s mysterious love object, Margo (Cara Delevingne), who might not actually have intended Quentin to pursue her when she suddenly dropped out of school and skipped town.

Personally, I have observed that YA novels are yielding some of the best and freshest literature of the current age. Furthermore, the movies made from these books (everything from Suzanne Collins’ The Hunger Games to last year’s The Fault in Our Stars, also by John Green) are often, but not always, filled with impressively accurate depictions of teenagers, be they young cancer survivors in love, hormonal combatants in a futuristic gladiator spectacle, or a poor geeky guy in love with a girl who may or may not be the love of his life but who has awesome eyebrows.

Not about the eyebrows, a subject on which he expressed no opinion. But he doesagree that YA novels often make the best movies. Actually, Andy’s views do not figure into this column beyond his original statement, which handed me a great opening line with which to launch a series of my own personal thoughts on the allure of “teen road movies,” which, come to think of it, there actually aren’t very many.

Beyond Paper Towns, I can think of only two others—The Sure Thing, a 1985 comedy starring John Cusack, and the 1979 Diane Lane debut A Little Romance. Like Paper Towns, The Sure Thing follows a teenager driving cross-country in a quest for a girl, though in the Cusack film, he just wants to get laid. In Paper Towns, the quest is all about true love, and the lengths to which our hero goes to find it, with the help of some charmingly faithful friends who are eager to help their lovesick buddy win the heart of the mysterious runaway with a penchant for leaving cryptic clues.

In A Little Romance, two 13-year-olds in Paris—one American, the other French—travel by car, train and gondola in order to kiss beneath the Bridge of Sighs in Venice, believing local legends saying that any two people who kiss under the bridge at sunset will love each other forever.

I haven’t thought of that movie in years, but I remember the first time I saw it because I saw it with a girl named Pinky.

More on her later.

In these films, the protagonist is often inspired by fictional stories of romance and adventure, inspired to their quest for love because … well, that’s what fictional guys do.  Since seeing Paper Towns with Andy—a somewhat hilarious father-son bonding experience, given that the theater was otherwise packed with females, most of them teens, and only one other male, who appeared to be a on first date—I have been thinking about the films that inspired my own beliefs about love and life, back when I was a senior in high school.

One such film was American Graffiti—which might qualify as a road movie, given that so much of it takes place in cars—a movie about the early ’60s that was released in the early ’70s, but managed to capture the strange blend of innocence and cynicism that teens often feel when hovering on the precipice of adulthood.

Like the heroes of the aforementioned films, Richard Dreyfuss’ Curt is on a quest to find a particular girl, the elusive Blonde in the White T-Bird. After spying her driving down the street one long night, frustrated with the choices his life seems to be offering him, Curt falls instantly in love, convinced that the girl in the T-Bird holds the answers he’s found nowhere else.

I see a pattern here.

SPOILER ALERT! In all of the films mentioned above, the nerdy guy never actually ends up with the girl. Or not for long, anyway. In most of those films, the most the hero gets is one kiss; then it’s goodbye, sorry, you’re not my type—but in a good way. And in American Graffiti, Curt never manages to do more than talk to the Blonde in the White T-Bird for two minutes on a pay phone.

I identified with Curt, having become similarly smitten with the aforementioned Pinky. She drove a Toyota, not a T-Bird. We lived in a Los Angeles suburb, not Modesto. My clumsy but highly creative pursuit of her was assisted, just like in Paper Towns, by a band of friends with nothing else to do. In high YA fashion, they helped me send Pinky on a Lord of the Rings-style treasure hunt that concluded with me rescuing her, knight-in-shining-armor-style, from a band of sword-fighting orcs and Ringwraiths.

Talk about being inspired by fiction.

That story, for what it’s worth, was the basis of my 2012 play Pinky, which I have recently learned is set to be staged in Marin County in the fall of 2016.

But where was I? Oh, right. Fiction. The thing is, as a one-time teen myself, I can see that my ideas of the world were partially derived from whatever I saw in front of me—and I saw a whole lot of movies. In half of them, true love always wins out. In the others, love crashes and burns in a flaming ball of teenage angst and bad timing.

I saw that one at a drive-in movie when I was 8.

From Romeo and Juliet I learned that Olivia Hussey was the most beautiful girl in the world, and that love, even when it crashes and burns, is more or less worth the trouble—because it’s love.

Which, more-or-less, is what Quentin and his friends finally learn in Paper Towns, even if the happy ending they eventually arrive at requires a somewhat different definition of “happy” than the one they all learned at the movies.